NOT FOR RELEASE, PUBLICATION OR DISTRIBUTION, DIRECTLY OR INDIRECTLY, IN OR INTO THE UNITED STATES OF AMERICA, AUSTRALIA, CANADA, JAPAN OR ANY OTHER JURISDICTION WHERE TO DO SO WOULD BE UNLAWFUL

This press release is an advertisement and not a prospectus within the meaning of the applicable laws. This press release is not an offer to sell securities or the solicitation of an offer to buy securities. Any offering of securities to the public referred to in this press release is made only on the basis of information contained in the prospectus (the “Prospectus”) published by Novaturas AB (the “Company”) in connection with the planned initial public offering of its shares in Poland, in Lithuania and in Estonia as well as in connection with their admission and introduction to trading on regulated markets organized by the Warsaw Stock Exchange and by AB Nasdaq Vilnius and which, can be obtained from the website of the Company (www.novaturasgroup.com). Additionally, for information purposes only, the Prospectus has been published (i) in the English language together with its summary translated into Polish on the website of Powszechna Kasa Oszczędności Bank Polski S.A. Oddział – Dom Maklerski PKO Banku Polskiego w Warszawie (www.dm.pkobp.pl), (ii) in the English language together with its summary translated into Lithuanian on the Lithuanian website of Swedbank AB (www.swedbank.lt); and (iii) in the English language together with its summary translated into Estonian on the Estonian website of Swedbank AB (www.swedbank.ee).

“Our strategic goal is to retain our top position in the attractive tourism market in Lithuania, Latvia and Estonia as well as further geographic expansion on the prospective Belarussian market. We are aiming at further growing the scale of our business while at the same time retaining high profitability ratios. Our business model is characterised by high operating cash flows and low capital expenditures. We are not investing in fixed assets such as offices, hotels, aircraft or coaches, focusing instead on our core business. And we prefer to regularly share our earnings with our shareholders. Novaturas is thus a unique combination of growth and dividend company,” said Linas Aldonis, CEO of Novaturas.

Novaturas Group is the leader of the tour operator market in Lithuania, Latvia and Estonia, in terms of both sales value and passenger volume. The Group’s market share in the organised chartered flights segment exceeds 40% in the region.

Novaturas was established in 1999, became the market leader in the Baltics in 2004 and has maintained the leading position ever since. The Company's competitive advantages include a strong and well-recognised brand, high customer loyalty and very good relations with travel agencies and service providers, thanks to which Novaturas can provide its clients with a diverse and attractively priced offering. Aside from the Baltics, Novaturas has begun offering its products in Belarus, where they are retailed through local partners.

Novaturas continues to attract new clients thanks to its attractive and diverse offering and the high quality of its services. The Group offers both summer and winter package holidays as well as sightseeing tours by coach or plane to more than 30 destinations worldwide, including the most popular holiday resorts in Southern Europe as well as select locations in North Africa, the Middle East, Asia and Latin America.

The Group's strategy also aims to retain diverse and complementary distribution channels. Novaturas works with over 400 travel agencies, including all of the major agencies in the Baltics, and more than 60 in Belarus. It also operates retail offices of its own in main cities of Lithuania, Latvia and Estonia, and is investing in further development of its e-commerce channel.

The rising demand for the Group's tours drives growth in operational scale and in market share, which translates into dynamic growth in financial results. In 2017, Novaturas Group’s revenue increased by nearly 40% y/y to EUR 141 million. EBITDA reached EUR 10.6 million, while net profit reached almost EUR 8.2 million, which in both cases denotes a nearly two-fold increase comparing to 2016.

The current year is also looking very promising for Novaturas Group, as confirmed by early bookings for the 2018 summer season. Demand for the Group's foreign tours is dynamically growing, even when compared to the very high client activity last year. Early bookings at the end of 2017 were up by 84% compared to the same period in the preceding year.

The Company’s asset-light business model, which is characterised by strong cash flows from operating activities (exceeding 100% of EBITDA) and low capital expenditures (EUR 0.3 million in 2017), allows it to pay out a large part of its earnings to shareholders. Paying regular dividends is one of the key elements of the Company's strategy. The Management Board expects that, based on the audited interim results of the Company for the first half of 2018, an interim dividend of about EUR 6 million will be offered for payment. In the long term, the Management Board expects to propose for distribution 70% - 80% of the Company’s net profit. 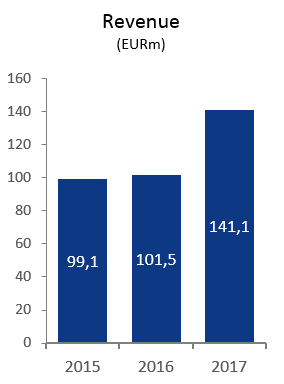 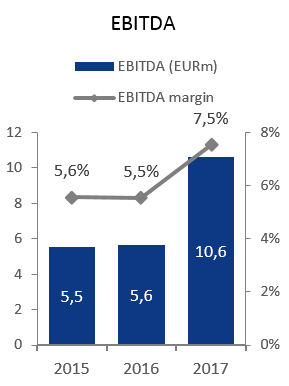 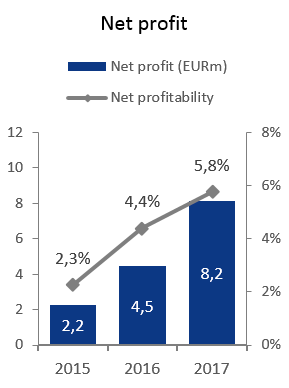 Key elements of the Group's strategy

This press release does not comprise a prospectus for the purposes of Directive 2003/71/EC and does not contain or constitute or form part of any offer or invitation, or any solicitation of an offer, for securities and should not be relied on in connection with any contract or commitment whatsoever. The offering of the securities referred to in this press release (the “Offering”) and the distribution of this press release and other information in connection with the Offering in certain jurisdictions may be restricted by law and persons into whose possession any document or other information referred to herein comes should inform themselves about and observe any such restriction. Any failure to comply with these restrictions may constitute a violation of the securities laws of any such jurisdiction.

This press release is directed only at (i) persons who are outside the United Kingdom, (ii) investment professionals falling within Article 19(5) of the Financial Services and Markets Act 2000 (Financial Promotion) Order 2001 (the “Order'”) and (iii) high net worth entities, and other persons to whom it may lawfully be communicated, falling within Article 49(2)(a) to (d) of the Order or (iv) other persons to whom an invitation or inducement to engage in investment activity (within the meaning of section 21 of the Financial Services and Markets Act 2000) in connection with the Offering may lawfully be communicated or caused to be communicated (all such persons together being referred to as “relevant persons'”). Any investment activity to which this press release relates will only be available to and will only be engaged with, relevant persons. Any person who is not a relevant person should not act or rely on this document or any of its contents. The Offering will not be made to the public in the United Kingdom.

This press release is for promotional purposes only and under no circumstances shall constitute an offer or invitation, of form the basis for a decision, to invest in the securities of the Company. A prospectus, which was approved by the Bank of Lithuania – the Lithuanian capital markets authority together with the Polish, Lithuanian and Estonian translations of the summary on 23 February 2018 and notified to the Polish Financial Supervision Authority and Estonian Financial Supervision Authority, is the sole legally binding document containing information on the Company and the Offering as well as on admission and introduction of Company’s securities to trading on regulated markets organized by the Warsaw Stock Exchange and by AB Nasdaq Vilnius and which, can be obtained from the website of the Company (www.novaturasgroup.com). Additionally, for information purposes only, the Prospectus has been published (i) in the English language together with its summary translated into Polish on the website of Powszechna Kasa Oszczędności Bank Polski S.A. Oddział – Dom Maklerski PKO Banku Polskiego w Warszawie (www.dm.pkobp.pl), (ii) in the English language together with its summary translated into Lithuanian on the Lithuanian website of Swedbank AB (www.swedbank.lt); and (iii) in the English language together with its summary translated into Estonian on the Estonian website of Swedbank AB (www.swedbank.ee).

This press release does not constitute a recommendation within the meaning of the Regulation of the Polish Minister of Finance Regarding Information Constituting Recommendations Concerning Financial Instruments or Issuers Thereof dated 19 October 2005.

No reliance may be placed for any purpose whatsoever on the information contained in this press release, any verbal discussion thereof, and such information may not be complete or accurate.

Acquiring investments to which this press release relates may expose an investor to a significant risk of losing all of the amount invested. Persons considering investment should consult an authorized person specializing in advising on such investments.

Powszechna Kasa Oszczędności Bank Polski Spółka Akcyjna Oddział – Dom Maklerski PKO Banku Polskiego w Warszawie, Trigon Dom Maklerski S.A. and Swedbank AB are acting solely for the Selling Shareholders and the Company and no one else in connection with the Offering, and will not be responsible to anyone other than the Selling Shareholders and the Company for providing the protections afforded to their clients nor for providing advice in connection with the Offering.

Some of the information in this press release may contain projections or other forward-looking statements regarding future events or the future financial performance of the Company. You can identify forward-looking statements by terms such as ‘expect’, ‘believe’, ‘anticipate’, ‘estimate’, ‘intend’, ‘will’, ‘could’, ‘may’ or ‘might’ or other similar expressions. The Company wishes to caution you that these statements are only predictions and that actual events or results may differ materially. The Company does not intend to update these statements to reflect events and circumstances occurring after the date hereof or to reflect the occurrence of unanticipated events. Many factors could cause the actual results to differ materially from those contained in projections or forward-looking statements of the Company, including risks specifically related to the Company and its operations.